–EDIT: September 12, 2013
In light of recent events regarding Hammarhead Industries’ customer service reputation, we would like to warn our readers against purchasing from them online. While their online shop is still ‘functional’ in the sense that you can still pay for an item, they have not been responsive to any customer inquiries regarding lost payments, deposits, or delivery of product. Their lack of any kind of presence is disappointing for us, as I’m sure it does for you, and we will keep our readers abreast of any information that might help them recoup their losses.–

Hammarhead Industries just released the newest addition to their line of soft goods, the HHI Day Pack. Built at the request of a Jack Pine (modified Triumph Scrambler) customer, this bomb-proof bag is made out of the toughest materials available and paired down to the absolute (modern) necessities. 15″ laptop sleeve, iPad sleeve, Kindle & passport sleeve. No key-ring, no ice-axe loops, and no headphone port for your discman. But how big is it, you ask? The HHI Day Pack is specifically designed to hold an entire bag of groceries standing up. The steaks and beer you will carry in it are kept safe from the elements by boot leather stitched onto 15oz Martexin Waxed Duck Canvas. The straps are the same that hold you into a racing harness, and the buckles are designed to attach you to a parachute. Oh yea, and it only comes in black. Matt Trigaux, Creative Director for Hammarhead Industries, invited The American Classic down for some photos and his first exclusive interview. Afterward, we chased Mason around Philadelphia on a Jack Pine to show you just how nicely this thing carries your daily necessities, be it steaks & beer, cameras & clothes, or gasoline & croissants. 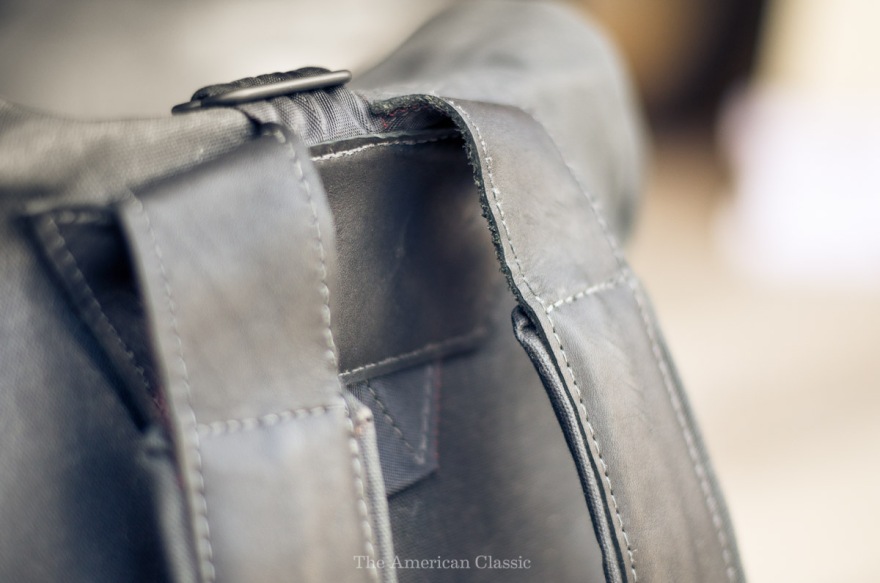 What inspired the creation of the backpack?
The Day Pack was inspired from one of our Jack Pine customers asking for a backpack recommendation to ride with.

I understand everything was made in the USA; can you tell me more about the choice of materials and their source?
We spent 8 months testing different materials and hardware to find what made it to the final cut. The first thing I did was go to an army surplus stores and buy 30 old military bags. Some were in such bad shape the straps literally fell off before I was out of the store. I went home and dissected each one, looked at the different sizes, hardware used, interior materials, etc. I’ve found using old neglected bags is one of the best ways to see how different fabrics hold up with little to no upkeep.

We ended up going with American made 15 oz Martexin Wax Cotton for the main construction of the bag. We wanted to use something that was waterproof, would last, and break in beautifully over time. We experimented with a bunch of different weights of waxed cotton before deciding on the 15oz. For the bottom we used black leather salvaged from a NYC shoemaker, the buckle is a USA made parachute buckle, nylon webbing is sourced from guys that make racing car harnesses in the Midwest.

What challenges presented themselves during the prototyping of bag? Were there initial considerations for exactly what you wanted the bag to accomplish, or was it heavily adapted during prototyping?
The biggest thing for us was really stripping a bag down to it’s essential elements. Use a roll top to secure the main compartment, use one strap and a big buckle as the only closure which doubles as a haul loop. The size was very important as well, for me living in a city, if a bag can’t fit a full bag of groceries it’s pretty much worthless. I don’t want to have to switch bags, I want one that can do everything, but I also don’t want one that is too big that can’t secure my laptop, like I found with my old messenger bags and courier backpacks.

We went through several prototypes before arriving at the final bag. We tweaked the pattern, materials, and hardware, finding the main buckle was the most challenging piece. We found most buckles that can fit the width strap we wanted were way too big and heavy to be used on a bag. Most of the buckles we tried we felt were too complicated, their original purposes are usually for rock climbing, sailing, stuff like that, they need to be rated to hold 1,000lbs so they often look really tactical. The buckle we ended up going with was the simplest one we found. It is made out of two pieces of metal with one internal spring, I spent 4 hours one day trying to break it, couldn’t do it, that’s when I knew it would work.

How long have you been testing this design for? I remember you had an early model at Oktoberfest last year, and recently you were testing it out during a build in Paris…
We’ve been testing and tweaking the prototypes for 6 months, 2 months prior was design and material experiments. We had final prototypes for a motorcycle build we did in Paris this past January. That was the first time I had been on a plane with the bag, the size was perfect for a carry-on and I had all my camera equipment, laptop, and clothing in it. That was really the moment when I felt like it was finished.

How did you bring Hammarhead’s design philosophy to the execution of the bag?
At Hammarhead we’re always seeing how we can strip down what we’re designing to it’s elements. It’s easy to add stuff on, much harder to edit and take away. We also don’t make anything new if it already exists. We have a custom handlebar switch that James developed specifically for our motorcycles to serve as the horn, hi beam, and turn signal indicator, all in one control. He searched for months to find one that was simple and well made, out of metal not plastic. It just didn’t exist, so we went ahead and had it made. This bag derived from the same mentality, when we realized we couldn’t recommend a riding bag to our customer, we decided to make our own.

During the testing, what was the biggest/most ridiculous thing you’ve carried in here?
The biggest was probably a 24 case of Dogfish Head 90 Min IPA along with some other stuff. Most ridiculous was probably the 1/2 gallon of gasoline and bag of croissants I had in there while in Paris.

Even fully loaded, the HHI day pack fits perfectly into the middle of your back. This is due in no small part to the parachute buckles and harness straps, which are easy to adjust (even with gloves on) and stay exactly where you cinch them. I always believe that form follows function, and Hammarhead definitely nailed down both points on this one. Go ahead and carry everything you need to take care of business, without looking like you’re a mountaineer or bike messenger.