I live in Santa Monica, CA. which means that the weather is amazing almost all of the time. While you chumps were out shoveling snow, my friend Wes and I were out shooting shirts for Jeffrey George Co. in perfect 75 degree weather. We went to a park near where I live which was jammed with primarily families as well as a pretty massive group of geriatric residents doing tai chi. Santa Monica is home to many different walks of life but predominantly families as well as elderly folks. I do a lot of photo shoots in my neighborhood; it’s a beautiful place. Every time I do, I get a lot of weird looks and a lot of people asking questions. When we shot the Battle Royale of the American Made Shirt in 2012, I was asked no less than 10 times if we were shooting for GQ. Flattering, yes of course but it got the models in a weird mood and suddenly it felt like we had to put on a show of making this a “fashion photo shoot”. I went to 7-11 before we met and grabbed an Arizona Iced Green Tea and shoved it in a paper bag. No one will ask you questions when you’re carrying a tall can in a paper bag. Thusly, we had a very peaceful photo shoot. I had Wes jump in a shopping cart we found just for fun and a homeless man passed us (you can see him in the photo). He didn’t even bat an eye. Perfect camouflage.

Jeffrey George is a young company designing mens shirts and neckwear. Like most companies, this is a great starting point because there are many manufacturers based in the US specializing in these products and they’re quick sells to get a brand off the ground. Everyone needs shirts. I find that just when I think I’ve got enough and won’t be needing any more, something happens (read: life) and I have to replace one or get another for some sort of event. We reviewed two shirts for Jeffrey George: their standard Blue Oxford shirt featuring Japanese oxford cloth and their denim shirt featuring a very lightweight denim, almost like chambray. Click here to read the review and view the photos.

Wes is an awesome guy. He’s a designer at a creative firm in West LA and by trade is a super talented classically trained illustrator. Many of his charcoal drawings are beautiful, disturbing, and extremely raw; this is the side of fine art that we don’t get to deal with often so it’s cool to know someone who is as kick ass as he is. As a bonus piece of trivia, in the film 21 Jump Street there’s a scene involving a photo of a Korean Jesus. Wes played the live-action version of said Korean Jesus in the actual film. I was really hoping these shirts were going to fit him as they fit me perfectly and the height difference between us is about 3-4 inches. These still fit him great.

Having reviewed so many shirts over the years, there’s a few crucial points I look for when judging the quality of fit and design of the garment. One major thing for me is the placement of the second-from-top button. If it’s too low, you look like you’re going to a club in the 70’s. If it’s too high (which is more often the issue), you’re choking even with the top button unbuttoned. Jeffrey George nailed the button placement. Not too high, not too low, and it looks great with the top button open. Another point I look for is the width of the sleeve. If it’s too wide, it looks flabby and on slim fit shirts companies occasionally forget to trim up the sleeves in addition to the body. Jeffrey George nailed this as well. The sleeves are the perfect width to compliment the general fit of the body of the shirt. Not too wide so you don’t have parachute arms, not to slim so it looks like you’re trying to show off your underdeveloped biceps. The last point I look for is the cut of the bottom of the shirt. I really like it when the cut is higher on the sides and lower in the front and back. This allows you to tuck in the shirt without being uncomfortable and without slipping out of the back or front. These shirts were not designed with a tucked look in mind and while you can totally tuck these with no problem, they’re not ideal for this purpose. They look really great untucked and have a great bar tack detail where the front and rear body panels come together (we’re not talking about cars now, promise), but again these shirts are designed to be untucked.

I love the fit of these shirts. I have an exceedingly average-build, as does Wes, and they fit us both wonderfully. Not too slim but definitely a little more trim than your typical slim fit shirts. This allows you to not look like a disheveled slob when wearing these untucked, as they were designed to be worn. They mention on their website that these are slim but not skinny: I believe that compared to other companies who make this statement, these shirts are a little bit slimmer. That’s okay. They work great. No “overstuffed sausage” look happening here, and that is crucial in judging the fit of a slim shirt. 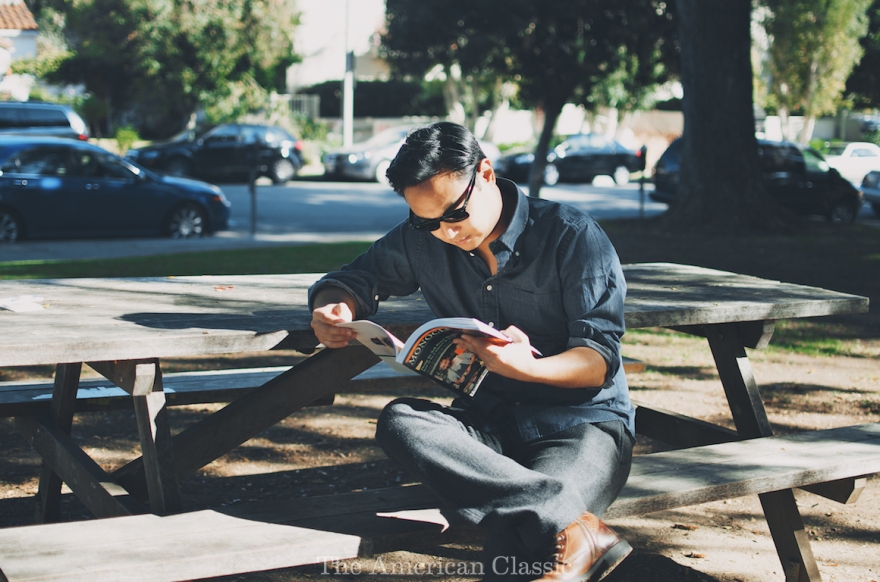 I really liked the fabric of the Japanese oxford shirt. Broadcloth comes in a huge range of makes and this one feels really nice. I can only imagine over time it will get even softer (already it’s very comfortable) and get some great character the way broadcloth always does. The denim shirt is great as well. I have a straight up denim shirt made from denim you’d make jeans out of and holy hell is it heavy. This is not that. At all. It doesn’t look chunky and it doesn’t feel quite as summery as a typical chambray would, but looks like a nice darker denim you’d wear on your lower half with the softness of a chambray-esque fabric.

I sent some interview questions over to Jeff Boore who reached out to us to write this article. Here were his responses:

What made you want to get into the clothing business?

I have always been very interested in men’s clothing, more specifically I have been fascinated with clean, classic styles most often seen in past generations. From the complete other end of it, I have always known I wanted to choose a career where I could really help people, but just wasn’t sure how. I decided why not combine the two, and with that we got here. A men’s clothing company selling shirts and ties is not a radical idea, but a men’s clothing company selling great shirts and ties (we believe they’re some of the best) at a reasonable price, that also happens to promote some positive change, was an idea that we thought could really catch on.

Talk about the process of getting Jeffrey George off the ground.

We focused on the product, knowing that it was most important. We wanted to only sell the best product we could get our hands on, regardless of cost, so we began our search there. We went through our options and decided to go with two factories that we knew not only produced the best in the industry, but also have been doing so for a long time.

Other than great product, another focus was to really help guys out there become more informed about what they were buying. We saw this was an area really lacking in the industry, and we wanted to help change that. We wanted to set the tone for it early on by doing things like making it easy to see where everything came from right on the site, and explaining the details that really sets apart a quality shirt from the pack.

I wasn’t looking to start the company on some big marketing scheme or gimmick, and knew this would be a long road. Instead, I was looking to create something that would grow and expand because people truly loved what we had to offer.

Talk a bit about the design process for each piece and fabric sourcing.

We focused a lot of our design attention on fit. Baggy doesn’t look good on anyone, and unfortunately most guys confuse baggy with comfortable. We focused on making a better fitting shirt that was still comfortable, hence the design details you see through the shirts like the side pleats and split yolk.

Speaking specifically to design, I believe good fitting clothing doesn’t need to be loud in design; the fit speaks for itself. I think a lot of guys believe that in order to dress well their clothing needs to be loud, which in many cases can be just the opposite. I am a strong believer that clothing should help the guy look and feel better, instead of taking the attention away from the person.

The same attention to detail was paid to the fabric sourcing. Speaking specifically to the oxford shirt you reviewed, that particular oxford cloth is made in Japan, makers of some of the best fabric in the world. The feel of this oxford cloth as opposed to other oxfords is a huge difference, and is even more noticeable after a few washes. This same attention went into the rest of the fabric sourcing, and we look forward to expanding to include even more great fabric mills in the future.

Overall, we designed these shirts to still be in style years down the road, and believe we have done just that.

Talk about the manufacturing process.

As I said before, we only looked to work with the best manufacturers we could find. I also made a huge effort to learn as much as possible along the way, as I am not afraid to admit that I do not know everything about clothing. It’s important to understand the amount of knowledge some of these manufacturers have. Take our shirt maker for example, the factory has been churning out shirts for over a century. Understanding that they know fine shirting better than just about everyone was very important. I think the biggest thing as a company is realizing you are not a step above any manufacturer, but instead partners.

Another aspect that was very important was finding manufacturers that treated their employees fairly, and did their part in having a positive impact. We cannot run a company that prides itself on helping others without making sure our manufacturers do the same.

What are some pieces Jeffrey George hopes to manufacture in 2014?

Looking to the future we definitely have plans of expanding the line. We obviously want to continue with the shirts and ties, but hope to include some more dress options as well. We are also looking forward to some exciting collaborations with some manufacturers and other partners. Lastly, we have some plans in the works to include pants at some point, but that one is a little down the road and should be available later in the year. It is really important to us that we don’t try to expand too quickly, just for the sake of expanding, but instead to really nail down what we do best before adding something else.

It’s always fun for us to be a part of the early stages of a new clothing company and we’re really excited to see what these guys do next. For now, we highly recommend checking out their offering and staying tuned for future releases.