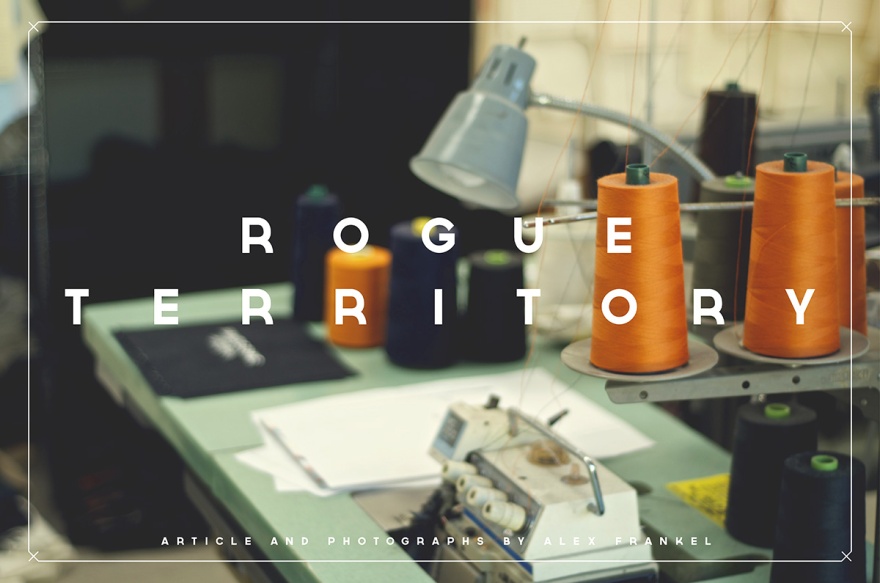 A few weeks ago I visited Karl Thoennessen, the man behind Rogue Territory, at his workshop and studio in his home in Atwater Village, a little neighborhood nestled in between Griffith Park, Silverlake, and Glendale. I was living near Silverlake at the time and it was a quick drive over to his place on a weekday morning, though given the unpredictable nature of Los Angeles traffic I gave myself ample time for the short cruise across the 5 freeway. After arriving nearly 15 minutes early at his place and having just got a text from him asking if I wanted anything from Proof Bakery, I circled the block. Twice. Click below for the interview and photo set.

I pulled up out front, grabbed my camera, and started walking in the general direction of his house. I noticed an enormous camouflage box truck parked in his next-door neighbors driveway, hooked up to a bunch of tubes and wires.

“Alex?” someone called out. I looked around and noticed Karl’s head peeking over the top of the gate to his driveway.

“Please tell me that’s your truck,” I said as I walked over and shook his hand.

“Really?” In my mind I was thinking of the epic photos that were about to ensue capped with the title [Rogue Territory: Zombie Destroyer].

“Uh, no,” he said abruptly, and we walked into his back yard.

The space is beautiful; what was theoretically once a garage has now been transformed into a fully functional studio for Rogue Territory. There are several sewing machines throughout the room and patterns (the guidelines for how clothes are cut to fit) hanging from every visible surface including a clothes rack lining the entire left wall. There were stacks of pants and shirts/jackets (shackets?) on tarps on the floor, on the worktable, and on the couch. I noticed a few of the projects I had been interested in talking about, specifically the RK-ISC (indigo-dyed selvedge canvas cut kind of like a denim/dress pant hybrid) created in collaboration with Ryan Plett, and the Drake Camo work shirt and trouser set created in collaboration with Need Supply Co. There was also a great pair that Karl did for Tenue de Nîmes waiting to be dispatched. 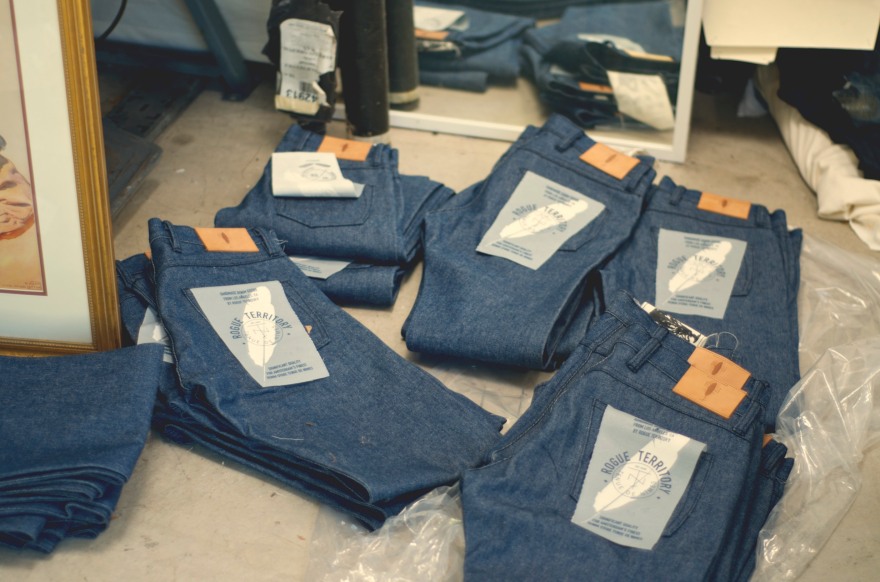 The place isn’t messy; you can tell he’s got a system going on somewhere beneath all of the fabric. I sat on the couch next to a few indigo dyed chore coats he’d been working on with a new type of pocket (it’s awesome, look for it soon (I hope)) and we talked about his start in the denim world:

AC: Could you talk about what you were doing before moving to Los Angeles and the process of working with American Rag and becoming your own company?

RT: After college I moved with a small marketing company to San Diego. I worked there for about 2.5 years and was feeling unfulfilled. My wife (girl friend in the SD days) was feeling the same way about her job and was applying to business schools on the East and West Coast. When she got into a school in LA and NYC it was a toss up. I honestly think that it was that one decision that really altered the course of my/our lives. So, we moved to LA. I don’t have a job, Leslie’s about to start school and we’re doing some ‘back to school’ shopping. We come across American Rag’s Denim Bar, where I was indirectly introduced to the world of ‘custom jeans’. At this time, I am a super denim nerd, obsessed with my 1947 LVC 501s and PBJ 007s. The concept of custom jeans got me super excited, so I tracked down the dude that was running it asked him if I could apprentice under him. The next day he gave me the crash course in pattern making, and sewing and left it up to me to figure out how to make a pair of jeans. About 2 weeks later I made my first pair. It wasn’t enough to just make one pair. I wanted to continue doing it. I made a pair for Leslie, my Mom and Dad, brother and sister and I didn’t want to stop. I was already on the second pair for myself when my Mentor tells me he has to close down the business and go find a job…this was at about the 3 month mark.  All this time nothing was being done with the American Rag space so I jumped at the opportunity to take up residency there.  I offered custom jeans and denim alterations.  I was there 7 days a week cutting, sewing and drafting patterns. I guess you could say this is where Rogue Territory was born.

AC: Talk a little bit about the progression of the Rogue Territory story: the hawk and the feather.

RT: When I created Rogue Territory I was in full denim nerd mode. I loved the styles of the 50s and 60s. Cuffed jeans, boots, white Ts and leather jackets. That true American rebel that guys like Dean, Brando, McQueen and Newman played so well. That’s originally where the name came from – Rogue replaced ‘rebel’ and Territory was used to define every crease, stain and hole that tells a story of your life and how you wear your jeans. You create it, you own it, it’s your territory. That was the thought process anyway. The central image behind Rogue Territory has always been the feather.  The feather was inspired by this print of a native American chief that was hanging on my bedroom wall as a little kid. As I grew up the print got moved around and hung in different rooms but I was always drawn to it. When I moved into the American Rag space I knew I had to have him hanging on my wall. Using this print as the inspiration I wanted to some how capture the essence of it with one simple image, one feather from his headdress seemed to make sense. As the brand evolves Rogue Territory and the feather have started to take on a new meaning for me. For me, Rogue Territory defines all those unknown, untamed, and unexplored spaces, whether it be in a city or in a rain forest or on top of a mountain or in a rural village these spaces are rogue territory until you’ve explored them, and it only makes sense that you be outfitted in the most functional and well crafted garments while on these adventures made by Rogue Territory.

We’ve started incorporating the image of a hawk in some of our garments.  I’ve always been drawn to birds of prey and especially hawks.  I think the hawk is the epitome of freedom, exploration, self-reliance and badass-ness and I’d like to think that the feather that I pulled from my native American chiefs headdress was indeed a hawk’s feather.  The hawk rules the sky, which is the ultimate rogue territory. So there you go, it comes full circle.

“For me, Rogue Territory defines all those unknown, untamed, and unexplored spaces, whether it be in a city or in a rain forest or on top of a mountain or in a rural village these spaces are rogue territory until you’ve explored them, and it only makes sense that you be outfitted in the most functional and well crafted garments while on these adventures made by Rogue Territory.”

AC: What’s your favorite piece that Rogue Territory has produced?

RT: The Stantons in every type of denim I’ve introduced. I’ve worked tirelessly on that fit, applying multiple revisions throughout the years and that was the first fit I ever introduced.  Also, a little factoid – every other fit that I’ve made has been based in some way off the Stanton block.

RT: More all around.  I’m working on more long sleeve shirts, outerwear, new bottoms, and accessories.  I just want to keep making shit I think is cool, and hopefully other people will too.

I ended up picking up a pair of those RK-ISCs from him and have been loving them ever since. Wearing them at the office is perfect because they work well with my boots or if I have to dress it up and throw on a pair of wingtips they’re just slim enough to look great with those as well. They aren’t as heavy as denim but have just as much detail put into them as a pair of raw selvedge. Speaking of which, they’re selvedge. And they have slanted pockets. And white herringbone fabric pocket bags and lined back pockets. I really dig these pants, if you can’t tell. 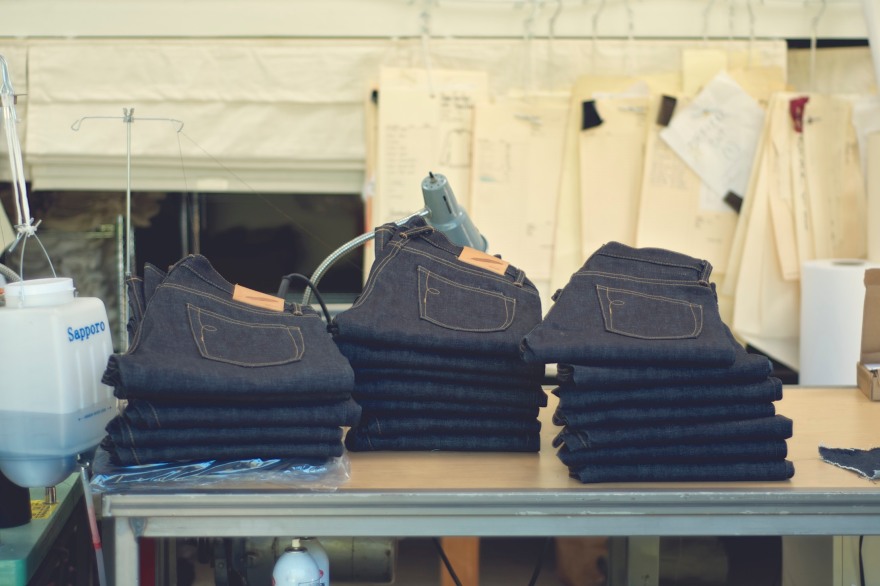 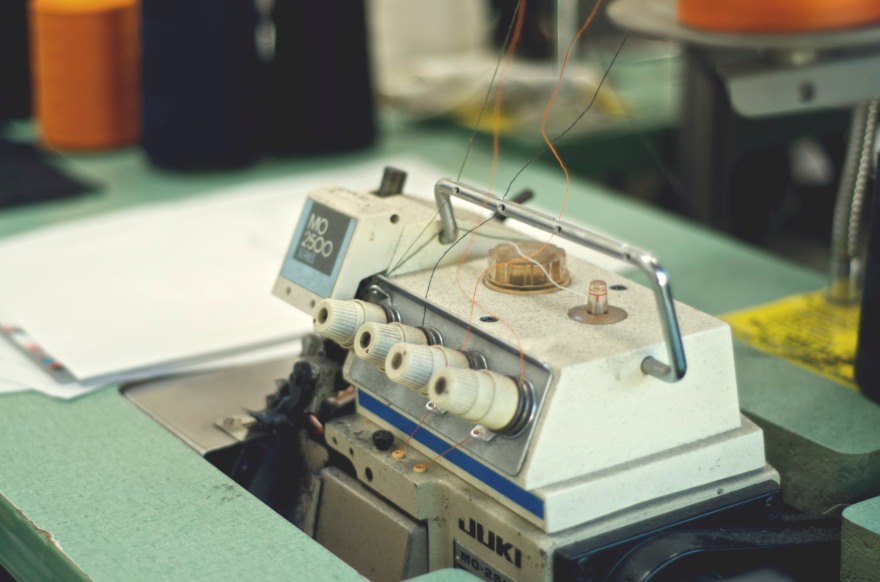 I was wearing a pair of Left Field NYCs to the meeting, which I’ve enjoyed thus far, and we started talking about jean construction. Karl asked if I liked the felled seam on the interior ankle of the LF NYCs and I said I did, it felt like a heftier stitch and therefore not as cheap as other jeans.

“Cheap!” he exclaimed. I realized only a few minutes before we had been talking about a new pair of non-selvedge jeans he was working on that didn’t use felled seams.

“I didn’t mean to say cheap. I guess I meant just more aesthetically tidy,” I scrambled for words as I realized I looked like an asshole.

“No, no. It’s good to educate you on this kind of thing,” he said, somewhat reassuring me in that I didn’t seem like that huge of an idiot. “It’s cool if you like the bulkier cuff.”

In the past few weeks of wearing these RK-ISCs after they had been properly hemmed by Karl himself (when else can you get your pants hemmed by the guy that designed them?), I can say that the felled seam ain’t my thing anymore. The sheer amount of extra fabric that gathers around your ankles if you roll them makes it appear that you’re wearing selvedge-indigo fruit loops around your shoes. At the end of the day, we at The American Classic are denim nerds, too. Admittedly, we know nothing compared to dudes like Karl. When it comes down to it, he’s just a nice guy who makes awesome pants and keeps it all close to home (all manufacturing is done in downtown LA. Did we mention that before?). What more can you really ask for?

Check out Rogue Territory online here. Their stuff fits true to size for the most part. I sized up one for my RK-ISCs but I’m sure if you shoot Karl an e-mail he’ll be glad to answer any questions you have. 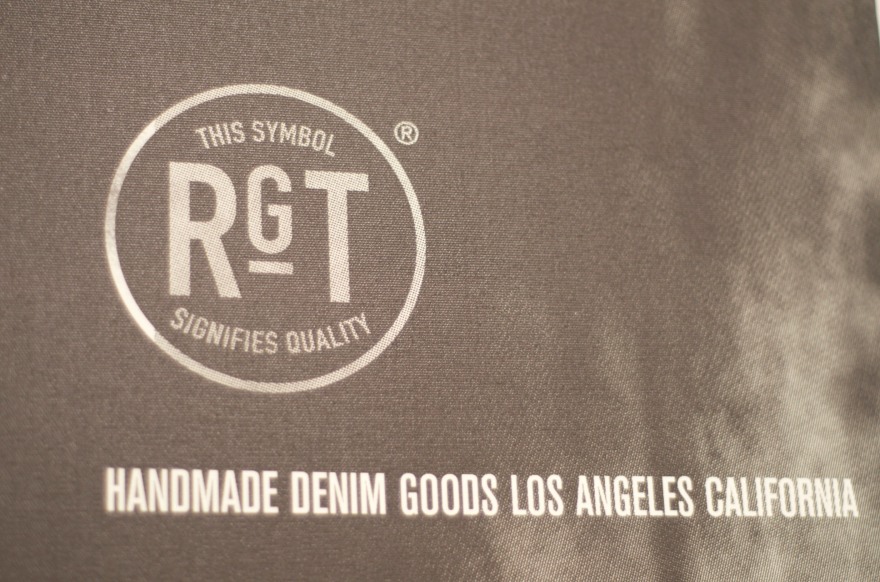 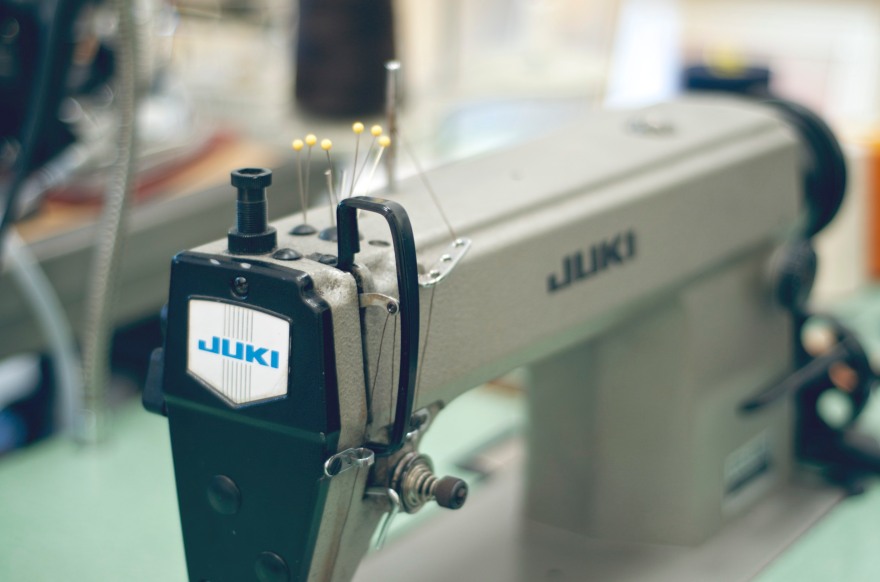