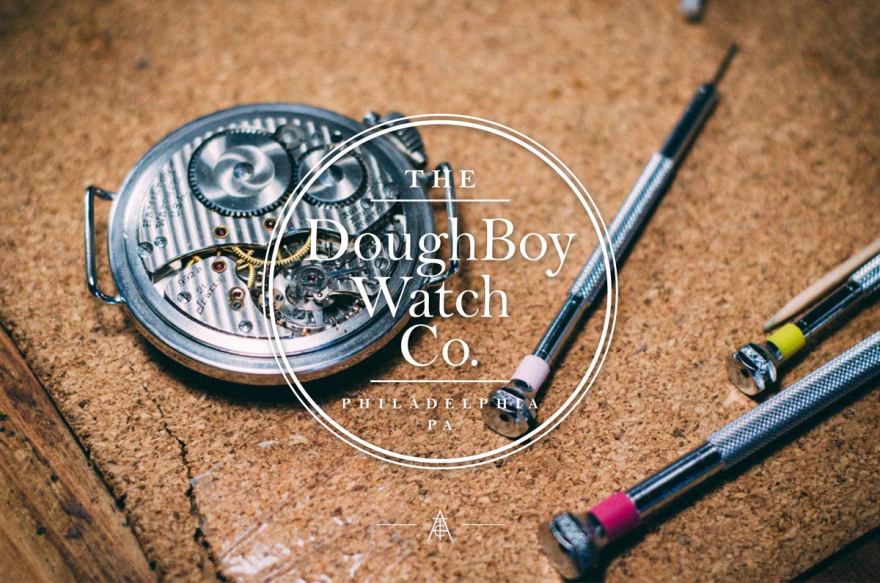 Just barely over a year ago, we introduced to you our friends at Doughboy Watch Co. in Philadelphia, PA. Tom, the man behind the loupe, takes turn-of-the-century mechanical masterpieces refurbishes them into the precision timepieces they once were, before putting it on your wrist in the style of a WWI trench watch. These beauties belong on your arm, and the absence of batteries means you will always know what time it is no matter what part of the world you may find yourself in, and no matter how long you’re there. 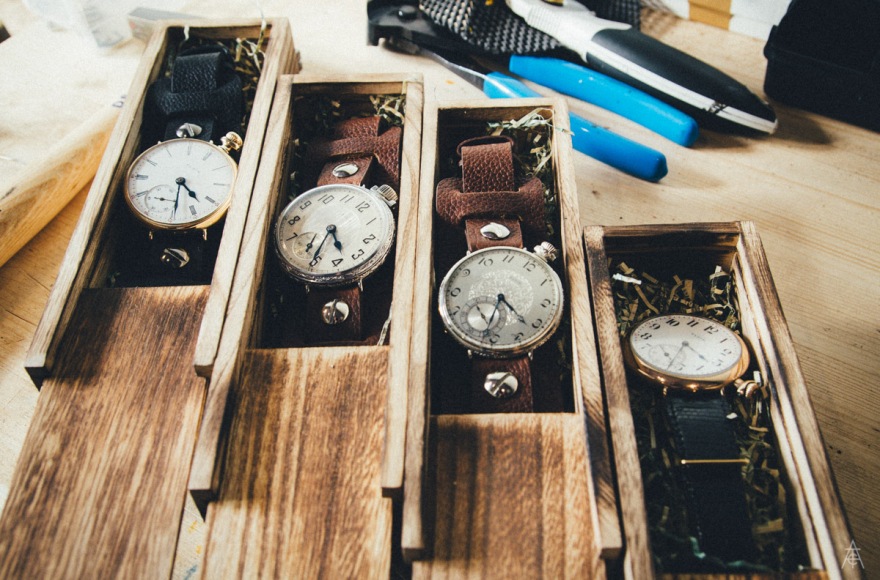 Four watches cradled in a nest of shredded US currency, ready to be sent to their lucky buyers.

Shortly after we featured Doughboy Watch Co. last year, they blew up in a big way, and featured a few high-end exclusives on UrbanDaddy Perks. Each watch is meticulously sourced and ID’d for historical as well as practical purposes. After that, the mechanicals are diagnosed and repaired, the case is fitted with metal lugs, and then the whole case goes for a spin in an ultrasonic cleaning machine. The watch is then tested for accuracy and worn personally by the maker for at least 3 days to ensure there are no flaws. Finally it’s paired with a leather band, posted online, and sold faster than a pint at Oktoberfest. Rumor has it that there are custom bands in the works as well, so you would be wise to follow @doughboywatchcompany on Instagram. The photos below are exclusive to The American Classic, and give a little bit of a glimpse into the upkeep of these beauties. Keep in mind, this is only the stuff I’m allowed to show you; there’s plenty in the works that I can’t reveal yet. Lucky for you though, as of yesterday a number of watches are also available via Amazon in addition their own store.

“Three original trench watches from the first world war that are from my personal collection. From left to right: a 1917 Elgin, A 1916 Omega, and a 1918 Elgin. The Omega is in a silver case and keeps perfect time.” -Tom, DBWC 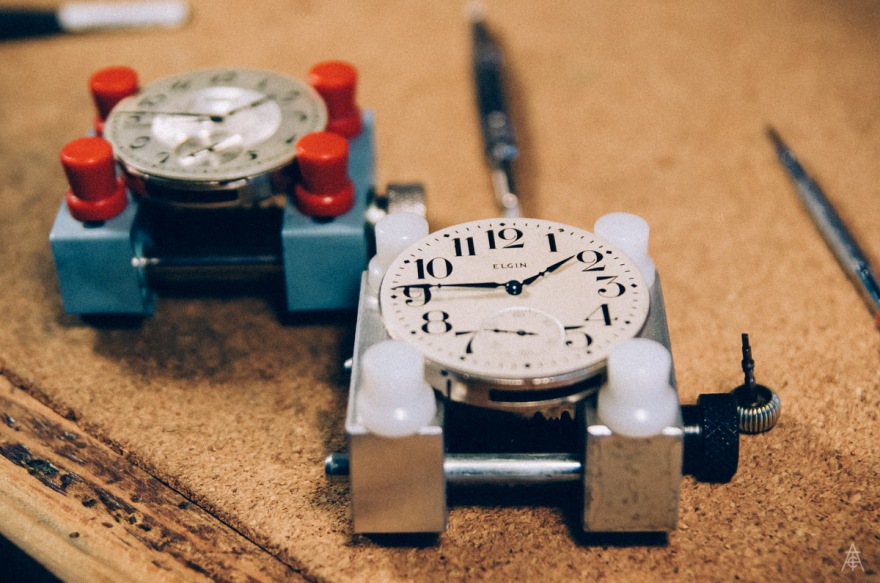 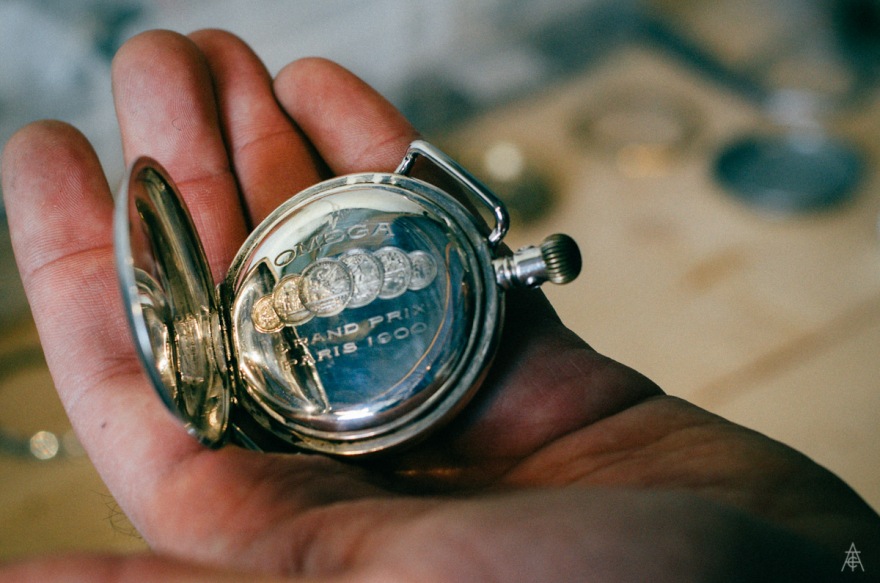 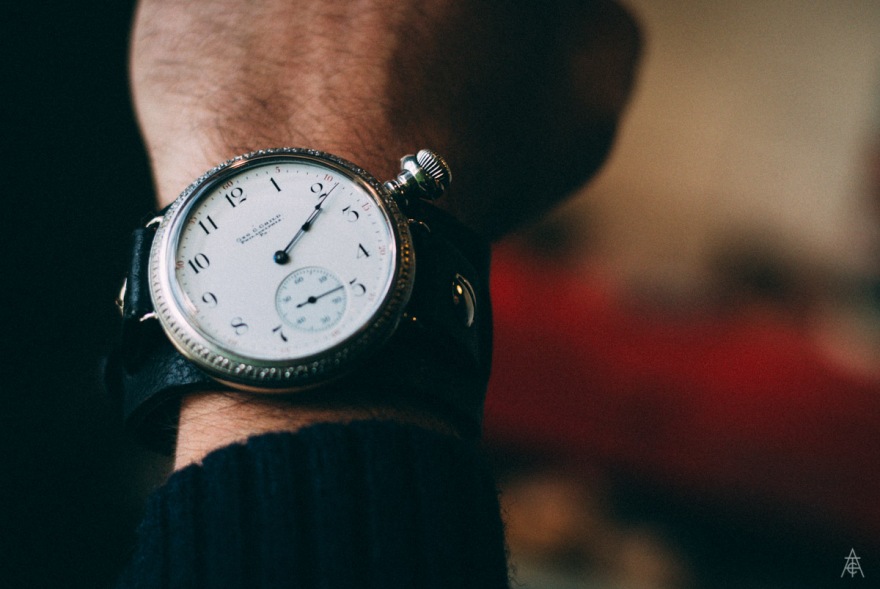 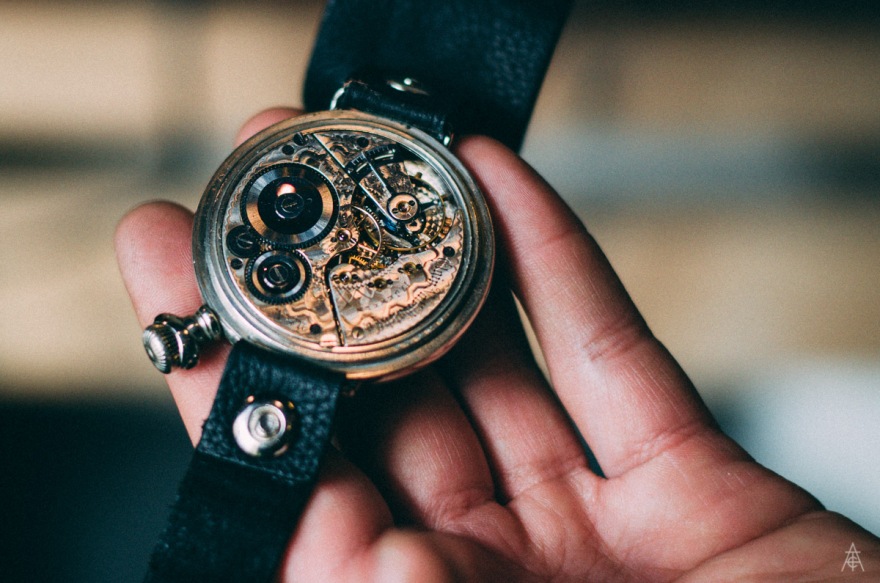 “Flip picture of the 1897 showing the artwork that went also into the inside of these beautiful watches.” 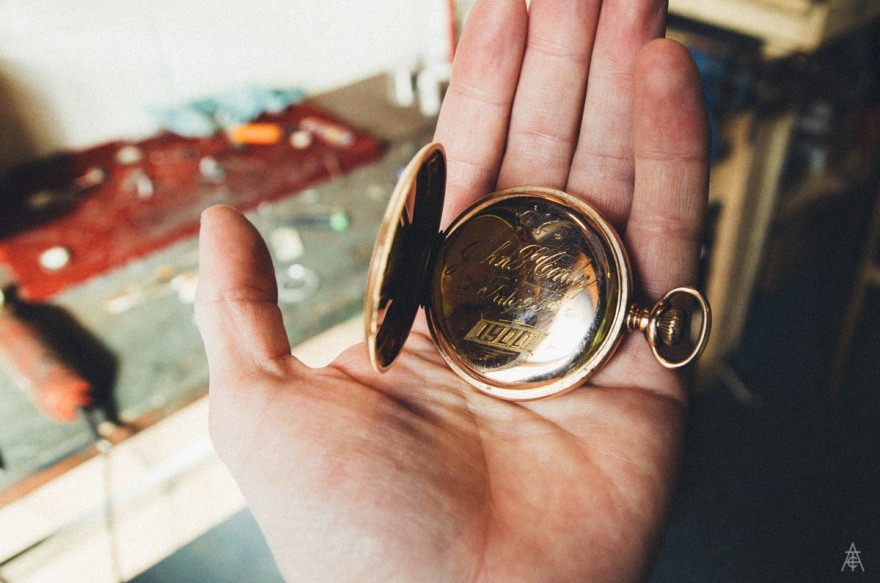 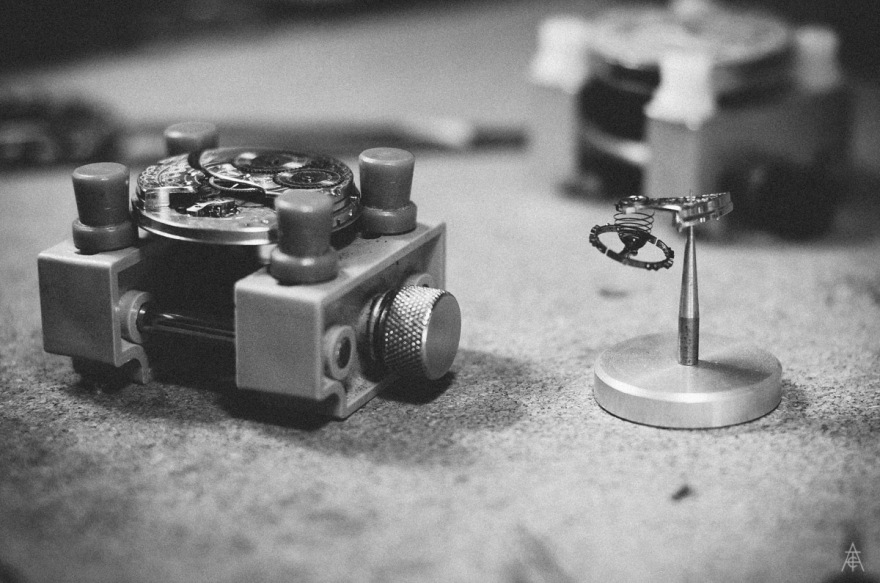 Watch movement in a vice, with its hairspring assembly on a stand. 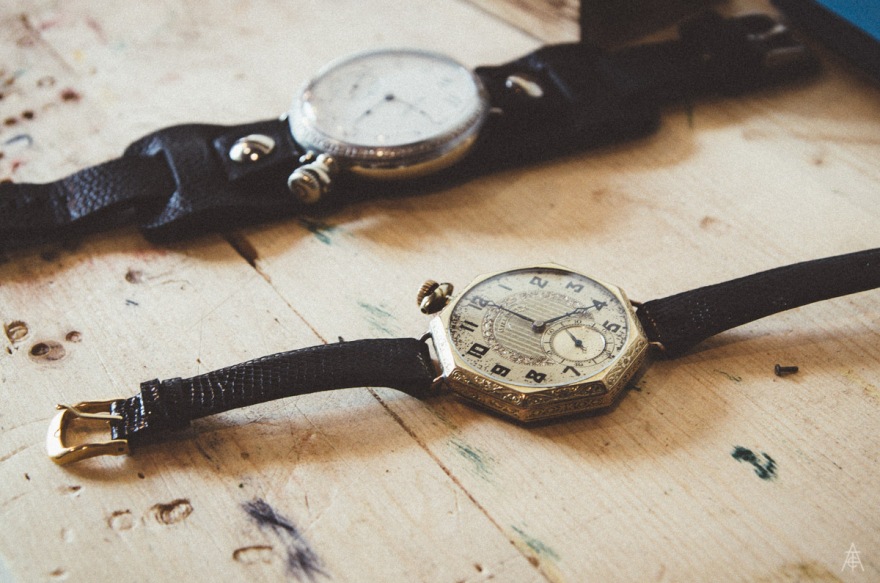 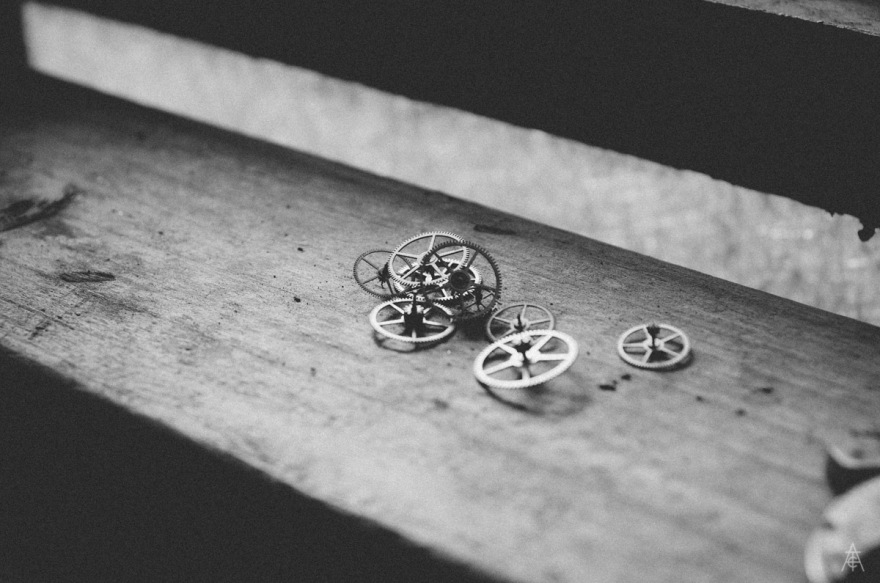 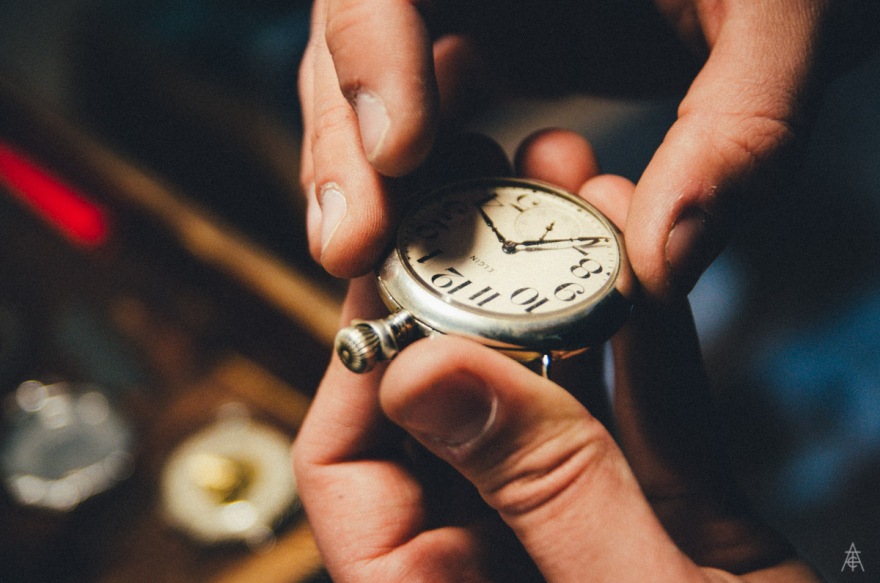 Images in this post were processed with VSCO’s latest film pack for LR5, the Archetype Collection.